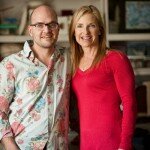 Co-Founders Steve and Lori met in 2001 at the Milwaukee Art Museum. It was then that Steve hired Lori as a resident artist to work on the inaugural ArtWorks Teen Program. They continued to work together on the program until 2008. It was during those years that the model for RedLine Milwaukee was born. Concurrently, Lori met Laura Merage, founder of RedLine Denver, at New York University in 2001. As they navigated graduate school together, Lori and Laura became friends and colleagues. Laura’s dream of creating an environment to help artists advance on their career paths began to merge with Steve and Lori’s aspirations. The result is RedLine.

Together, Steve and Lori have put in countless hours building the Board of Directors, committees and programming for RedLine Milwaukee, which was incorporated in December 2008 and opened in October 2009. They look forward to serving the diverse Milwaukee communities with art, culture and education. See you at RedLine!

What’s in a Name?  REDLINE…….Bringing Back the Memories of the Past.

As history enthusiasts, we have looked into our neighborhood’s past. This was an exciting experience.  We found that we had brought back some of the neighborhood’s rich history while promoting change for the future.

You may not be aware that RedLine is located in the heart of Milwaukee’s former Hay Market District. In its “hay” day, this neighborhood was the most densely populated area of the city and home to the Settlement House, a pioneering social service agency. When our building was erected in the early 1900’s it was the home of Philips Lithography Company, which retained its 1422 North 4th Street address until the 1960���������������s.  Our building changed tenants at a time when the  phenomenon of redlining came to light in this same area.  Redlining was a system of withholding home-loan funds or insurance to those who were poor, members of minority groups, or living within a certain geographical boundary.

As a counter to the redlining of the past, we are pleased to have created access in our far-reaching community based programs.  We are also excited to have brought the process of printmaking back to 4th Street.  Most importantly, we continue to not only invite but also encourage the community to step over the red line and enter a new territory of exciting ideas and activity.   Through art, RedLine Milwaukee is a place of access for all to gather and share in a social learning experience.

Steve Vande Zande
The majority of Steve’s time is spent in a classroom setting as an art teacher for Milwaukee Public Schools. Having worked as an education programmer for the Milwaukee Art Museum creating teen programs, and an educator of teacher training at Marquette University, Steve finds these experiences with students spanning early-childhood through adulthood as the impetus that continues to build his fascination with capturing moments in human development that are hard to put into words. This has been the main idea captured through his work as a multimedia artist. Steve received a B.A. in art education from the University of Wisconsin–Milwaukee and an M.S. degree in the area of leadership with an emphasis in the arts from Bank Street College of Education in conjunction with the Parsons New School for Design.

In 2003 he was the recipient of the Outstanding Educator of the Year award from the Wisconsin Art Education Association, and Excellence in Education by Milwaukee Public Schools in 2004. In 2009, Steve was awarded “Outstanding Faculty Lecturer for Educational Policy and Leadership” from the Marquette University College of Education. In a career spanning more than 10 years of working with Milwaukee Public Schools, the Milwaukee Art Museum, Marquette University and Artists Working Education, Steve has served and led over 3,278 children and teens, 150 university students, and 100 artists and teachers.

Lori Bauman
Lori was born, lives, and works in Milwaukee. She is a 1994 graduate of Alverno College receiving degrees in Art and Education. Lori received her M.A. from New York University in 2003, studying abroad in Venice, Italy. Lori’s most recent teaching experience is with the Milwaukee Art Museum. She was an artist-in-residence from 2001-2008, teaching ArtWorks and ArtXpress, teen outreach programs. Lori also taught video art at Alverno College from 2004-2006. Lori focuses on collage, video and site-specific works.

Together, Steve and Lori have spoken on the topic of Artist Residencies at both Art Chicago in 2011, and at the Alliance of Artist Communities Conference in Kansas City, 2012.